The Codex of the  Monastery  Matka is a small manuscript, containing 49 +1 pages. It mentions all those who helped and asked for prayerful intercession before God. At the end of the Codex, are written selections and parts of the prayers of the Matins service.

The Codex of the Matka Monastery was completely elaborated and published by Slavica Nikolovska in 1975.

The Dormition of the Most Holy Theotokos monastery Codex

From this monastery came the Codex which is  located in the National Library in Sofia. The manuscript for the main part was created in the sixties or the seventies of the 16th century, and in later periods was constantly added to. The Codex contains entries from the 17th and 18th centuries, in which the writing style, language,and content differ from the earlier entries.

True, the Codex carries later dates of entry (1564-1580), but, certainly it is a transcript of an older original which was later added to. Three writers worked on the initial, basic section: Hieromonk Eustrati, monk Nicodem, and Azariah. This, we learn from the records of the manuscript that were left by them, about their work.

The Codex of the  Monastery  Matka is a small manuscript, containing 49 +1 pages. The first sheet provides an introduction, which is characteristic of most Codices, and in which is stated that the church was built with labor and love.  The liturgical vessels are mentioned (gold and silver), the icons (decorated with silver and gold), and the books (with and without metallic bonds).  And everything that is stated in the Hrisovul and the Codex of  the  holy  founders (a document,  we are not familiar with).

On the inside of the cover, there are a few entries. In one of them is mentioned the Archbishop of Ohrid, Prohor. There is only one Archbishop named Prohor among the Ohrid archbishops, who were on the throne from 1528 to 1550 (seven years before the re-activation of the Peck-Patriarchate, by the decree of Sultan Mehmed Selimovich and subjugation of the Skopje Eparchy within it).

The Codex is actually a dedication (a commemoration list), from where these names are mentioned during church services – for good health of the living, and  for a place in the kingdom of heaven for the dead.  Before the names the dedication section, is written that it should be read during the liturgical service, every Saturday.  This confirms that there were regular worship services in addition to the Sunday services, when by tradition in the monastery of Matka, all the ascetics of the caves and hermits would gather for a Liturgy.

The Liturgies were served even at the request of the faithful, which is carefully written alongside their names in the Codex.

In the dedication section of the Codex, is listed the Reverend Metropolitans – Herman, Matthew, Jovan, and Athanasij “Metropolitan of Skopje.” Although this is not stated, presumably Athanasij and the others are all Metropolitans of Skopje.

The Metropolitan of Skopje, Matthew, is also mentioned in an inscription of a Christening Vessel, in Markov monastery in 1394, who died in 1428

Besides the Metropolitans, are listed the names of the hieromonks; 11 hieromonks of the monastery Matka, as well as some from Ohrid and Marko monasteries, monks, nuns, priests, and then the names of many believers.

A calendar table was made by Hieromonk Eustrati. On page 45, are drawn two squares, diagonally placed, located in two concentric circles, and in their center a cross is drawn, creating four fields on which is written IS HS – NI KA. In the four fields on the intersection of the two squares are the names of the evangelists, and in one of the twelve remaining fields, clearly can be read the name Paul.

At the end of the Codex, are written selections and parts of the prayers of the Matins service.

The manuscript also contains many entries relating to the gifts and contributions of the pilgrims to the monastery.

The Codex names all the Orthodox inhabitants of the cities: Kicevo, Debar, Ohrid, Kastoria, Veles, Prilep, Janina, and others, as well as the villages throughout the area of ​Skopje, some of which do not exist today, or they exist, but lack Christian residents.  According to records in the Codex, the population of Skopje was divided into nobility and layman.  Evliya Chelebija, in the 17th century describes: “the population of Skopje is composed of merchants, farmers, craftsmen and scholars.”  The nobility was mainly of Orthodox Christians, and it’s believed that it contributed to the continuity of the life in the monasteries in Skopje, and the surrounding area, even after many centuries under the Ottoman rule.  Certainly, the main reason for this is the proper spiritual life of the monks, laid on the foundation of the ascetical-hesychastic Tradition.

About the respect of the residents towards the monks,  D-r J.Hadzi-Vasilevich wrote: “The name monk, can hardly be heard in the Skopje area. The people used to call them kalugeri (monks) and they were more appreciated than the clergy. The kalugeri were considered well educated. Confessors were only the kalugeri. They were addressed as ‘grandfather’ by the people and ‘duovniche’ (spiritual father), and the priests are referred to as ‘Father’ or less frequently with “dedo pope”(‘grandfather, Father). In the monasteries in the 19th century, there were few nuns. “

Among the Hieromonks mentioned in the Codex are: Abbot Hieromonk Metrophan, Hieromonk Basil, and Hieromonk Theodore of Marko monastery, then from Krushopek the Hieromonks Nestor, Avramij, Anthony and Ananij, monk Paphnutius of Ohrid, the monk Theodosius from Prizren, from the Shishev Monastery, Hieromonks Nicodem and monk Theodore, Hieromonk Sylvester from the village of Gorno Sonje.  The priests that are mentioned are from several villages and towns: Krushopek, Glumovo, Shishevo, Dobridol, Prilep, Grachac, Kuceviste, Orizari, Skopje, Matka, Rakotinci, Bojane, and Zhemirci.  Which means, at that period, the monastery was very active as a spiritual center, with a secure material position which allowed them to accommodate a vast number of clergy and believers, which were investing themselves in it (by personally helping the monastery).

Codex, but also according to the folk tradition present among the local population, in this monastery, probably due to the favorable location, there were many monks and priests. Literary activity was constantly cultivated, and there was a library, whose books were used for the monastery’s own needs, but were often borrowed, and taken to the surrounding monasteries, and beyond.

The Codex was written in continuity.  One entry in the manuscript testify that it was transferred to Shishevo monastery when the abbot Hieromonk Savatij, of the monastery Assumption of the Virgin – Matka, crossed to St. Nicholas in Shishevo, which before the fire, in 1897 was borrowed by monk Chariton in the Bigorski monastery, and taken later, from there to Sofia.

Papers that mention the Codex of the Monastery

Written continuously, in a period of 5 centuries, the codex of the Monastery of the Dormition of the Most Holy Theotokos – Matka, is interesting from several aspects, historical, linguistic, religious. In the proposed papers (on Macedonian language), Slavica Nikolovska deals with it in its entirety, and in the other two it is mentioned as a kind of completion of the topic they cover. 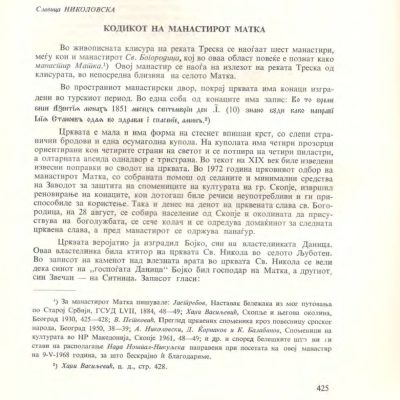 About the origin of the surnames …

“In the codex of the monastery St. Bogordica in Matka is registered the woman, whose name and surname are Bozana Popovska (AM Selishev 1933: 35). These, although scarce, data provide valuable and very important information about the sprouts of the female surname in Macedonia, whose offspring is far ahead of the time in which we have a stabilized anthroponomastic category of surname, in conditions of a very sharp patriarchal social context.”

Academician Blazhe Konevski, in the analysis of the records in the Codex of the Monastery of the Dormition of the Most Holy Theotokos – Matka, mentions the loss of the letters “l” and “h” – in many of the words in which they were used before. (Example: Tetovo – instead of Tehtovo, as it used to be)